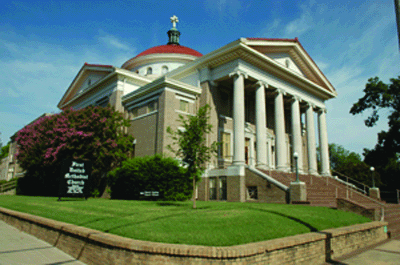 A Tradition of Mission & Ministry

The current Sanctuary was built following discussions of the necessity for more space at the church. The discussion began in April 1913, with the need for a new Sunday School building. This grew into plans to construct a whole new sanctuary with an expected cost of about $40,000.

According to the Conway FUMC church history book, “The plan was submitted to the congregation by G.L. Bahner, secretary of the Board of Trustees, who outlined the method of obtaining subscriptions or pledges to finance construction. The proposed building would face east, and its entry level would be raised to give it a more imposing appearance.”

Plans submitted by George W. Kramer of New York – “the foremost church architect in America” – were selected for the new church. Kramer himself stated that the Conway plans called for the most complete church building ever designed by his office, and that the estimated cost of $40,000 “could be met with little difficulty.”

The plans included a Sunday School annex at the rear of the new sanctuary. This part of the building was to have a basement and two floors of classroom and meeting space, including a study for the pastor and a large auditorium with heavy wooden sliding panels to create classrooms around the sides. The second floor would be open above the auditorium with classrooms around a balcony.

“My Dad told me that he had been a member of the church committee which was involved in planning the 1915 building. The west portion had been designed on the Akron Plan for a youth Sunday School area with large heavy doors or panels which could be slid or swung to accommodate the need for several small classes, then opened for the combined group. Around the 1940s, these Akron dividers were no longer in use.”

Work began shortly on collecting funds to pay for demolition of the existing red brick church building, construction of the new building and extra land that was needed for the construction. Demolition began in the fall of 1913 and the new building was expected to be open in January 1914. Sunday School and morning worship were held at the nearby Conway school building (now the Conway High School East campus). Sunday evening services were held jointly with the Presbyterian Church at Caldwell and Faulkner streets.

Almost 22 months after demolition of the old church, the new church was first occupied on Aug. 15, 1915. The total cost of construction had grown to $65,000. Sunday School rooms were used for the first time on Aug. 8, 1915. Rev. F.S.H. Johnston preached his first sermon in the new sanctuary to about 400 people on the next Sunday.

“The elegant new $60,000 Methodist church at Conway, the pride of Arkansas Methodism, will be opened in all its departments for the first time on Sunday, November 14. On Friday preceding this day a great reception will be given in the building, at which the public will be permitted to inspect it. The Sunday School rooms of the church have been used for several weeks as a place of worship, and it has been planned to complete the main auditorium in time for the annual North Arkansas Conference, which convenes here November 24, but the building will be ready, it is announced, about ten days ahead of this time.”

The article also quoted the church bulletin, noting that a thousand guests were expected, and that “everything will be done to make the time pass pleasantly and to assist the members of our church and those of our sister churches who visit us in getting acquainted with the various rooms of the building and their uses.” Members of the Board of Stewards were stationed in various rooms to serve as hosts and to answer questions.

For 100 Days in 2015, the congregation celebrated the 100th anniversary of this beautiful building. During the 100 days following Aug. 2, 2015, activities included: