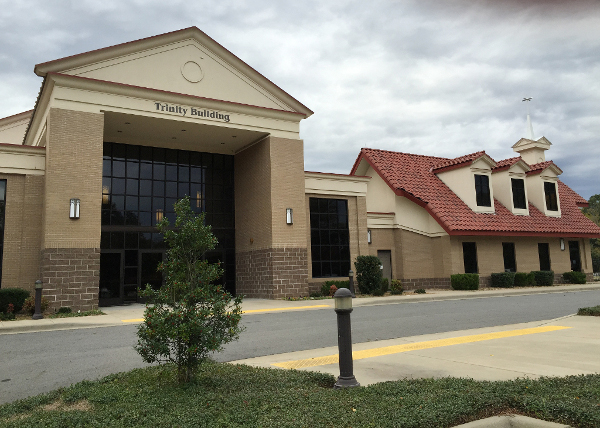 The Building of a New Mission and Outreach Center

In 2008, the congregation of First United Methodist Church built a new space that essentially doubled the work the people of this congregation have been called to do to spread the Word of God.

So how did this call to expand the church’s mission and ministry come?  It came in the results of a revisioning survey which indicated a need for more outreach into the community surrounding the church and across the globe.

“We are blessed with a diverse congregation and acknowledge that our members cannot give the same amount in dollars, however, we can all offer the same amount of sacrifice in our pledge,” campaign co-director Jan Davis said at the start of the effort.

It was decided that the new building would be used for additional meeting space for youth programs; community outreach programs; more worship space, especially for the Good News Celebration contemporary worship service; a larger fellowship hall to host family dinners; a chapel and parlor; and the relocation of the church’s Early Childhood Center.

During the building process, special worship services, prayer vigils, family dinners, a ground-breaking ceremony and a beam signing were held to bring the congregation together inside the walls which would one day hold classrooms where we would learn how to take God’s message outside those walls.

Construction officially started in late June 2006 on the $5.5 million, 36,000-square-foot building along the west side of the church campus. The main entrance of the church is to be moved from Prince Street to Clifton Street with the demolition of a one-story building that housed the Early Childhood Center since the 1950s.

So what were the visions of the future in this building?

In the short term, several activities were held to open the doors of all the facilities at First United Methodist to the public for times of worship, times of fun, times of learning and times of outreach and mission.

Some special events that were held included the Move-in Celebrations on Friday, May 30, and Saturday, May 31, 2008. These two days featured fun, food, prayer and music for this faith community and the public.

On June 1, Bishop Charles Crutchfield of the Arkansas Conference of the United Methodist Church brought the message during Consecration Services at a churchwide worship service at 10 a.m. in the new building. The three worship services normally held each Sunday were combined into one time of worship and fellowship.

Another exciting Sunday was Sunday, May 18, 2008, when the first Good News Celebration was held in the new Great Hall.

We invite all of you to join us in continuing to shape this building, and those buildings which have been here for decades, to better serve Conway, Faulkner County, Arkansas and the world. Love Grows Here — for all!